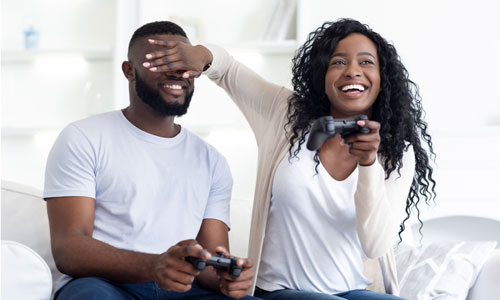 Since the beginning of the computer age, video games and the development of Artificial Intelligence have been closely related.

We are facing a new revolution in the field of video games and it is thanks to the development of Artificial Intelligence. When we talk about AI in video games, we refer to the set of techniques used to design the behaviour guidelines of NPCs (Non Playable Characters): those characters that the player does not control.

Currently, the definition covers much more than just characters in video games, it is going further: Artificial Intelligence is found in the design of levels and maps, and even in the creation of games from the beginning.

How is artificial intelligence developed in video games.

AI has been a part of computing since the time of 8 bits. Enemies already started to have AI when they acted following patterns in various situations. There was a following command methodology that was applied to Artificial Intelligence: if the protagonist shoots, the AI will crouch, if it is in the field of action, it will attack. But this command dynamic has changed; innovations in AI have altered the spectrum of video game interaction.

Through machine learning, deep learning or language processing techniques, artificial intelligence allows a machine or software to learn to analyse and process information from the environment to respond in a “human” way.

AI has a number of characteristics that differ from other applications of this technology and is oriented to entertainment within the game itself, operating in a virtual environment and without applications in the real world. This translates into a playful function that is not subject to moral issues. AI in videogames does not have the ethical component that it can have in other fields, since it does not affect people’s real life, only the game, and the virtual world within the game.

The latest advances have allowed the creation of tools that design videogames from scratch, only with data handled at the time. The objective is the processing of the largest possible amount of data and consequently, acting in the most efficient way possible. However, always with a human behaviour, not perfect, if this were so, the video game would become impossible for us.

Videogames in the beginnings of AI

Among the first games with artificial intelligence are computer chess games, developed in the 1950s based on the MiniMax algorithm, which analysed the position of the pieces to choose the best possible move. From these advances, games such as Pong (1972), Space Invaders or Pacman (already in 1980) could be developed, counting on route search systems for enemies.

The AI was still very archaic; the machine did not make the decisions really, if not by programmers through scripts. This means that machines do not really know why they choose one pattern or another, nor do they learn about their mistakes in the face of human behaviour.

Evolution of AI in video games in recent years

The 90s is a breakthrough in video game AI thanks to strategy games like StarCraft or Age of Empires, among others. The enemies were already able to use their resources efficiently and design tactics based on the player’s movements until adapting the difficulty. The FPS (First Person Shooter) also contributed to the improvement of the AI through the development of combat tactics and joint strategies. A good example is found in Half Life (1998) where enemies use rifles or grenades according to distance or position, as well as create strategies to flank the player. Later, in games like Skyrim (2012) or Alien Isolation (2014) they use AI and progressive learning to design missions, unlocking new behaviours and abilities, personalizing the game experience for each user.

The latest in AI is the development of procedural systems, capable of generating practically infinite terrain and scenarios as in Minecraft (2011). Currently, AI in video games is based on the development of video games, not so much on enemies, creating completely new games, with unique programming languages and very original rules and levels without limits. Developers will only have to design a horizon and wait for the AI to take care of the rest.

PrevPreviousWhat is a robot?
NextSensor and Edge Computing SoftwareNext

We are searching for new talents! The new candidates will work in R+D and PoC development. The obtained results will help us to redefine our product and value.